To say that my son, Scotty, is obsessed with LEGO would be an understatement.  So, I wasn’t surprised that he wanted that as the theme for his 5th Birthday party.  I am a big fan of LEGO, they have unlocked his creativity and gotten him engaged in learning so many problem solving skills at such a young age.  They do an amazing job at modeling the real-world, movie characters, vehicles, etc.  But let’s be honest, they aren’t that appetizing!     So, the first question that came to mind was…“How in the world am I going to make a dessert table based on plastic bricks?”

If that sounds like you or someone you know, hopefully this post can act as a blueprint of sorts to get you started.

I’ll start with the easier part, the decor.  LEGO has branched into so many themes that you really can’t go wrong in picking a theme and finding decorations to match.  I decided to go with the traditional vibrant color scheme. There are so many possibilities when it comes to primary colors and all the items I used were easy to find.

I knew I wanted to set the tone with a backdrop. I wanted it to look as though the entire wall was built out of giant LEGO bricks. I accomplished this look with a Colored poster board in which I glued inverted plastic plates. The trick is to measure your wall first and then use the dimensions to determine how many poster boards you will need and how many you’ll need to cut. Some of the “bricks” are smaller than others based on how everything needed to fit on the wall. Once the posters are assembled, you can connect them using clear packing tape along the seams from the back.  Just flip the posters upside down, keeping them in place, then use tape to connect the edges.  This will give you a more seamless look from the front.  We also ran tape in an “X” pattern from the corners to add some additional structural strength.  Once it’s together, you can secure them to the wall using tape, they are light weight so just a little will do. For the banner I used a similar technique using card stock and circle cutouts. Click here for the Lego font I used.

To set the table I wanted to create a stack-able LEGO table runner of sorts going down the center of the table with the cake being the centerpiece. I used building base plates as chargers and found the cutest LEGO forks and spoons as well as, plastic juice boxes that were the hit of the party. Using the same base chargers and some LEGO bricks I created a tiered tray to display the desserts.

I always try to create a fun party favor for the kids to take home with them so that the memory of the party lasts long after the party is over. To do this I used solid primary colored bags and glued on the circle cutouts and filled them with all sorts of fun LEGO themed favors.

As for the cake, I created candy bricks and mini-figures using candy melts and silicone molds. Since most kids already put the LEGO’s in their mouths anyway this was a way for them to ACTUALLY eat the LEGO’s – lol!

The party was a hit!  My little LEGO-man and his friends had a blast and it turns out that I answered my first question with another question, “Why use plastic when you can use chocolate?” 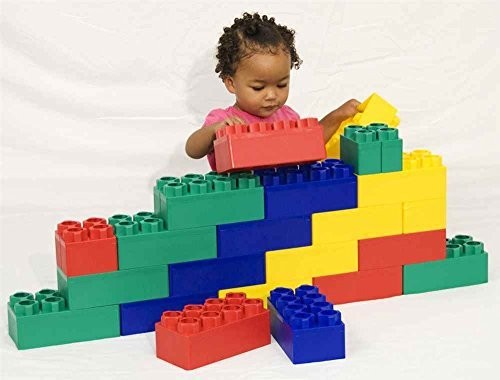